Situated in a quiet residential street, well-maintained apartment house with sun garden
Open-plan living and dining area on the ground floor with more than 47 m² of living space
Sliding door designed with glass elements in excellent condition
Top-maintained parquet flooring in the living area
The spacious living and dining area on the ground floor can be used separately or openly through the sliding door
Bedroom on the ground floor with a view of the private garden
Bathroom with tub and daylight
The fitted kitchen of the ground floor flat, whose floor plan corresponds to the flat on the upper floor
In the attic: built-in cupboard in the staircase with additional storage space, the kitchenette opens to the bright living area ...
... adjoining the bedroom with built-in closet
Plenty of space to live, live and enjoy: The living room on the ground floor with access to the conservatory
From the all-round glazed conservatory you can reach the garden
Quiet residential area with best connections
Sunny greenery on the doorstep and only 20 minutes to the city centre of Berlin
Quality of life for young and old: sunbed in front of the garden shed, ...
... the children's playground in the neighbourhood
Our website uses cookies. If you continue to use the website, we will assume that you have consented to this.
Berlin-Mariendorf

„This is the life“ – a generously-proportioned property offering peace, fresh air, and potential in the leafy Berlin district of Mariendorf. Solidly built, with a traditional floor plan and harmonious proportions, this house, with three floors and a basement, represents a wonderful opportunity for owner-occupiers and investors alike. How you take advantage of these possibilities is very much up to you. 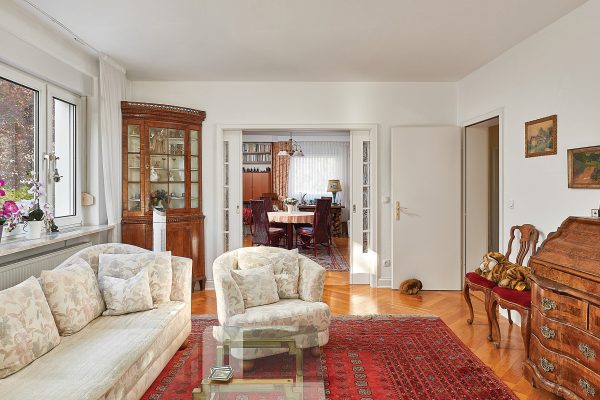 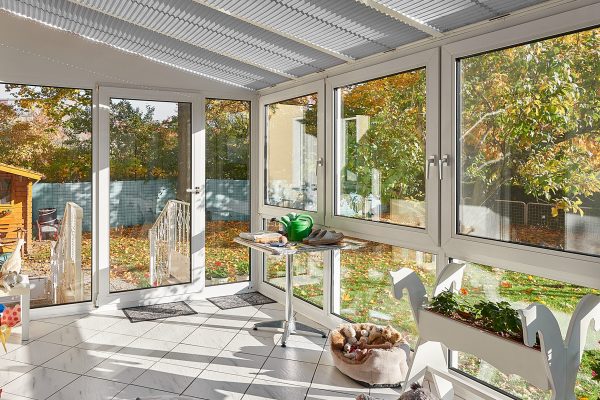 The residential building, built in 1936, extends across 220m² of living area, with eight rooms spread across three floors, and is surrounded by a pretty garden. The property is to be found in the middle-class suburb of Mariendorf. The architects took their inspiration from the style of the 1920s “Berliner Moderne”, prioritising functionality, yet ensuring the inclusion of elements which put across a sense of prestige.

The regularity of the floor plan extends from the basement right up to the attic floor. The upper floors are reached by means of a bright flight of stairs on the northern side of the building. This allows the different floors to function as independent residences, or for the building to be used as one large home for an individual family. Only the upper floor is rented out at present, though the tenant has no right to the use of the garden, which is exclusively reserved for the owner. The other floors will be vacant at the time of purchase.

The ground floor has a kitchen, a bathroom with a bathtub, and three other rooms, with plenty of parquet flooring. Any of which could easily be repurposed for use as a bedroom or an office. Separated by sliding glazed double doors with wooden muntins, the two west-facing rooms also open up into a generously sized space which would come into its own when hosting larger gatherings. On the southern side, this little suite connects to the bright conservatory, which also provides access to the garden. With the same layout of rooms as that on the ground floor below, the first floor has three rooms as well as a bathroom with a bathtub and a kitchen. The hip roof so typical of this architectural style encloses a flat with 44m² of living area which would be well-suited as a home for an individual occupant or for use as a guest flat. It is fully fitted out, with a kitchen and a bathroom as well as a bedroom and a sitting room. The homely basement has another four rooms, including the boiler room, complete with a 5,000 litre tank. The neat garden has a well-tended lawn, fruit trees, and a tasteful seating area. The driveway alongside the staircase provides space for parking.

Though the property is an idyll in itself, the area surrounding it is full of possibilities in terms of recreational activities and relaxation. Britzer Garten and the indoor and outdoor swimming pools of Kombibad Mariendorf are a walk of just 10 to 15 minutes away. There are plenty of nursery schools and primary and secondary schools in the surrounding area, as well as shops, restaurants and doctors’ surgeries. BER airport is less than half an hour away by car and the sophisticated delights of KaDeWe are just 20 minutes or so away. S-Bahn and U-Bahn stations with direct connections to the city centre are a little over two kilometres away.