Spacious, sunny luxury factory loft with three balconies
The more than 42 m² living and dining area
The prime piece in the former Garbáty cigarette factory, which was completely renovated in 2011/12
Starting from the spacious entrance area bathroom, bedrooms and living rooms open
Entrée details
The bedroom with balcony ...
... and ceiling-high Built-in wardrobe incl. push-to-open hinged doors and drawer units with self-closing mechanism
The adjoining studio can be converted into an the existing sliding door to the living/dining area
Large windows provide a view of the greenery in the flat
Main bathroom with skylight, bath, double washbasin and floor-level shower drain
High-quality fittings from Keramag, hansgrohe and Xeno
The afternoon sun falls through partially floor-to-ceiling windows in salon ...
... and living area, both with own balconies
Stylish furnishings, fine materials
View from the light-flooded living/dining area with open kitchen through the salon to the children's room
Stylish "Occhio" design double luminaires of the line "Sento soffitto due" in the living area
The open-plan eat-in kitchen of the NOLTE brand
Set back for restful tranquillity, your own car parking space on the property
Room for individual design and equipment
The office, separated from the salon by a glass wall
Optimal use of space with 3.80 m ceiling height in the guest room due to an alcove
The children's room, like all living areas, has oak parquet flooring
High-quality and generously equipped guest bathroom
View into a light-flooded escape, which measures more than 69 m² incl. the two balconies
Perfectly connected: The building ensemble of the former cigarette factory, less than 500 m from the S-Bahn station
Our website uses cookies. If you continue to use the website, we will assume that you have consented to this.
Berlin-Pankow

A choice cut of a property, a top-class address and wonderful possibilities. Plenty of things make this property what it is: the well-judged proportions of the former Garbáty cigarette factory, the excellent condition of the flat itself, the fact that is a mere stone’s throw from Alt-Pankow and the varied family-friendly infrastructure of the area. This extraordinary property in Berlin’s popular district of Pankow is a loft apartment — a rarity in other words. A closer look makes it clear that this is a unique property of exceptional quality. 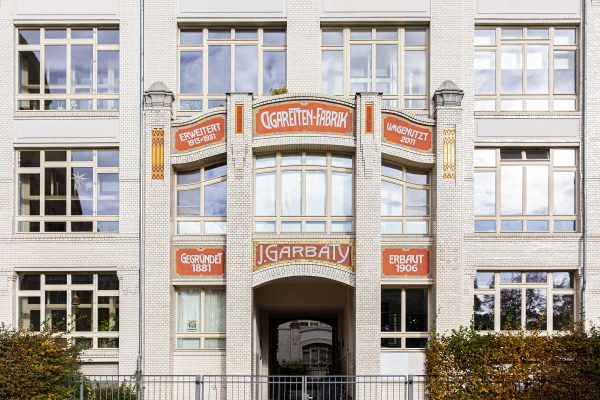 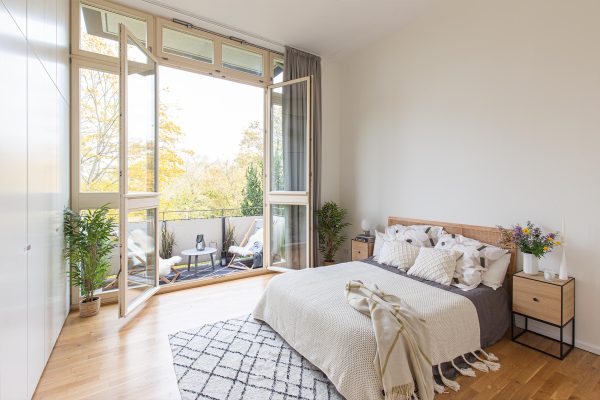 Over 157 m² of superbly renovated industrial architecture, brought up to present-day standards with seven rooms and two bathrooms, providing the discerning family with an extensive and versatile home — a place to live, a sanctuary, a space to enjoy, and a location for work. Accessible both by lift and by a flight of stairs and with two separate entrances, the flat is on the second floor of an ensemble which was built in 1906 and fully renovated in 2011/12.

With three balconies and beautiful big windows, some extending all the way down to the floor, this west-facing loft apartment simply radiates lust for life. On viewing the property, one is struck not only by the expressive and welcoming atmosphere which characterises the flat, but also by the upmarket interior, with oak parquet, a NOLTE open-plan fitted kitchen extending around one corner of the largest room, with a natural stone worktop and a kitchen island. The larger of the two bathrooms has a skylight, and both are equipped with high-quality bathroom fittings, double hand basins and walk-in showers by Keramag, hansgrohe and Xeno. This loft apartment owes much of its open and luxurious ambience to the 42 m² living/dining area and open plan kitchen suite in the western wing of the building. Bordered by two west-facing balconies, this area provides access to a north-facing studio.

The neighbouring bedroom of 18 m² provides access to the third balcony. In this room, the floor-to-ceiling wardrobe with push-to-open double doors, visually distinct internal dresser elements and self-closing drawers is particularly worthy of mention. Opening the sliding door between the living room area and the drawing room provides a view of a light-filled series of interior spaces which, including the balconies, measures 69 m². As evening falls, these rooms are lit by stylish twin “Occhio” designer lights from the “Sento soffito due” range. At 3.80 m, the ceilings in this flat are unusually high, and full advantage has been made of this in two portions of the apartment, with the creation of storage alcoves and an additional children’s bedroom. Wood/glass elements and glass doors, as well as the geometric regularity of the windows and skylights in the interior reveal this to be an apartment which toys with the vocabulary of formal design. Underfloor heating provides for a comfortable indoor climate and a video intercom ensures a high level of security. A portion of the cellar of the building can also be rented if desired.

The load-bearing steel frame of the building allows for an incredible degree of flexibility when it comes to the interior layout of this flat. Nevertheless, the existing arrangement of rooms permits the versatile and flexible use of the entirety of the interior space. The beautiful windows and balconies connect the flat with the leafy surroundings and its mature trees, and the large open areas in front of the building allow ones gaze to wander far into the distance.

This flat owes much of its unique character to the fact that it belongs to an ensemble of structures which formerly constituted the Garbáty cigarette factory. Originally, in 1906, the arrangement was in the form of the letter U, running along Hadlichstraße and Berliner Straße. In 1913, it was extended to the east and to the north, resulting in a square layout with a courtyard. From its very beginnings, this complex of buildings was connected to the centre of Berlin by a tram line. The property was renovated in 2011/12, and its location is still as superb as ever. The S-Bahn and U-Bahn are less than 500 m away, and nursery schools, primary schools and secondary schools are all within walking distance, as are shops for day-to-day needs, restaurants, doctors, parks and numerous sporting and recreational opportunities. The flat has its own parking space on the grounds of the building, and Alexanderplatz is a mere 20-minute drive away. The sliproad onto the A114 is just around the corner, a mere 5-minute drive away.