Loft-like flat on the 5th floor: bright light and a great view
Most of the furnishings are included in the purchase price if desired
Perfect for those who want to start immediately: ...
The spacious living and dining area, equipped with kitchenette and all appliances for everyday use
Stylish furnishings with plenty of room for personalisation
The flair of the 50s and 60s combines ...
... with the tasteful ambience of the present
The smaller bedroom, also usable as a guest room, children's room or study
Distant view across the courtyard
All living rooms facing south
The larger bedroom with more than 22 m² of living space
Plenty of space for individual room concepts and usage ideas
Life on the boulevard built in the 1950s in East Berlin
The bath with comfortable rainwater shower
Through the well-kept staircase up to the common rooms on the 7th floor ...
... or comfortably with the passenger lift
The listed building has its own parking spaces in the courtyard
Our website uses cookies. If you continue to use the website, we will assume that you have consented to this.
Berlin-Friedrichshain

Bright, loft-like and airy – in the middle of Berlin-Friedrichshain. This light-saturated apartment welcomes visitors with its open, modern charm, providing peacefulness and fantastic views of the distant horizon. The intelligent layout of this flat, combined with the arrangement of its functional elements, makes this an excellent home for individuals or couples who are keen to be in the thick of it all. Because when it comes to location, this stylish flat is difficult to top! 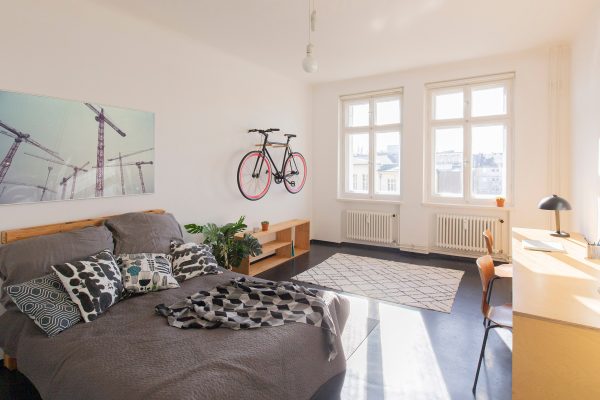 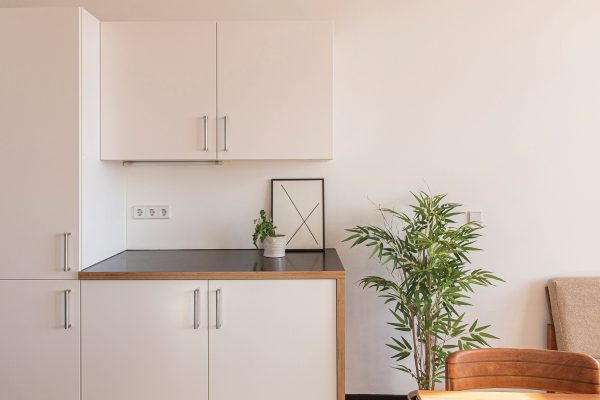 This three-room flat on the fifth floor of a residential building was built in 1954, right next to the square of “Frankfurter Tor”, and has a total living area of 70,25 m². Easily accessed by lift, entering the flat, you find yourself stepping straight into the bright, generously-proportioned sitting and dining area, which measures more than 27 m².

From here, all the other rooms can be reached in an instant: the bathroom with its luxurious rain shower and bathtub, the bedroom of around 22 m², and an additional room of 10 m², which could be used as a bedroom or as a study, depending on your needs. The current owner, an architect, has adapted the floor plan to suit present-day tastes. His well-judged modifications have resulted in lively relationships between the different spaces and uses of the property. This has been done in such a way as to preserve existing proportions, whilst making the best possible use of the south-facing aspect of the flat. This, combined with the flat’s commanding position on the fifth floor, gives it a loft-like atmosphere, bright and quiet. The latter characteristic is further enhanced by the courtyard and its collection of trees, which is just outside the window, beyond which the view stretches all the way to the distant horizon. A storage room in the basement and a sheltered parking space in the courtyard also belong to the flat. Recently renovated common rooms can be used on the 7th floor of the listed building. Last but not least, there is a room for bicycles on the ground floor.

The urban and extremely central location of the property is perhaps the clincher when it comes to this flat. All of the things the city has to offer are quite literally at your feet – be it shopping, culture and relaxation, or trans-regional transport connections. The U-Bahn and S-Bahn station “Frankfurter Tor” is just on the doorstep, as are bus and tram stops. Boxhagener Platz, a popular spot full of cafés and restaurants, is an easy ten-minute stroll away. For young families, the nursery schools, primary schools and secondary schools in the area are also easily reached by foot.

Hanns Hopp was an East Prussian architect who came to the GDR after the Second World War. He also worked together with the influential architect Hans Scharoun, whose work was very influential across Berlin before the Berlin Wall was built. The building at Frankfurter Allee belongs to “Block G”, a design which incorporates both sides of the broad avenue. It marks the eastern end of what used to be Stalinallee; East Berlin’s “socialist grand boulevard”, built in the 1950s. In the present day, this avenue, “Germany’s first socialist street” is one of Europe’s longest continuous listed buildings. The architect based the structure and proportions of the building on the rules governing classical architecture (Karl Friedrich Schinkel) and baroque palace architecture. The result is a structure which incorporates colonnades, balustrades, arcade stairs, ornamental figures, cornices, porticoes and ornamented window sills. Hanns Hopp also integrated a plaza into the design. The wooden window shutters, which have something of an Italian look to them, intensify the Mediterranean feel of the ensemble.