Sunny 4-room flat with south/west orientation
Impressive: first-class condition of the building fabric and rooms up to 3.60 m high
Sunny balcony in a quiet location with a view of the green neighbouring garden
The bright modern kitchen is located in the neighbourhood ...
... to the smaller room with built-in loft bed and separate balcony access
Daylight in the bathroom, well-kept wooden floorboards in the living areas for a high quality of life
Optimal use of space through generous loft beds in the smaller bedrooms
Entrée of the flat from the well-kept staircase
The double parking space in the garage increases the amenity comfort of the flat
After a walk of just three minutes, ...
... it invites you to stroll, swim and relax, ...
... the White Lake!
Our website uses cookies. If you continue to use the website, we will assume that you have consented to this.
Berlin-Weißensee

Sunny south/west-facing 4-room apartment with a big balcony – just 200m from the lake!

A stone’s throw from the lakeshore. This beautiful 4-room owner-occupied flat near the lake of Weißer See achieves the impressive combination of being set in a leafy, quiet area whilst still being centrally located. The structural soundness of the building and the sun-filled, high-ceilinged rooms make this south-west facing property even more desirable. An investment that you can truly enjoy. 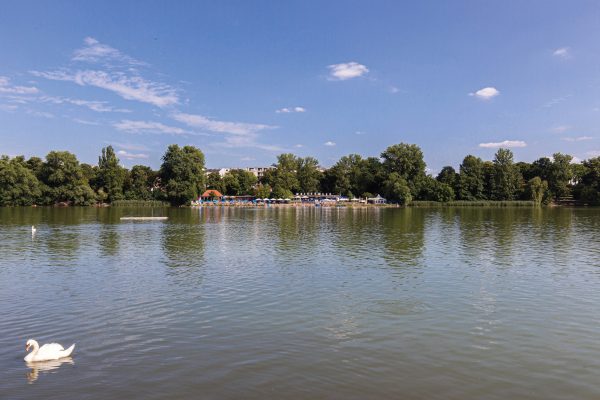 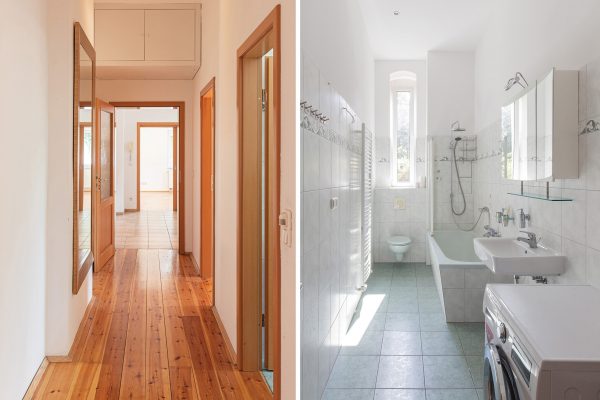 Sunny south/west-facing 4-room apartment with a big balcony – just 200m from the lake!

This 88m² apartment is to be found on the first floor of the side wing of a four-storey building which dates back to 1910. At the time it was built, this area was still beyond Berlin’s city limits. The evenly-divided building footprint and the regular spacing of the windows allow for a variety of possible floor plans.

It currently consists of four rooms of various sizes. This includes a light-filled room of 24.6m², which opens out onto a trapezium-floored balcony of over 12m². From this very large room one enters a second room or bedroom, measuring just over 7m² in size. In doing so, one passes the sleek, functional and modern fitted kitchen. There are three rooms along the hallway which takes you to the front door of the apartment: two rooms which could also function as bedrooms, one of 9.7m² and the other of 12m², with the bathroom between. Fitted out with a bathtub, a toilet, and a handbasin, there is also space for a washing machine. The ceilings, which are up to 3.60m high, not only lend an air of grandeur to the property, but also provide possibilities in terms of making use of this extra height, perhaps a raised platform here or a mezzanine there. The platform beds which have been built in the smaller bedrooms have already enabled the optimal vertical usage of space and increase the usable volume of the flat.

Within the area of the flat, a little conversion work here and there would open up the possibility of turning this into anything from a 3-room to a 4.5-room apartment, entirely in accordance with your own wishes. It would thus be possible to expand the existing kitchen by combining it with the 7m² room in order to create something more open-plan with additional access to the balcony. A section of the largest room could be also walled off, creating a separate space for focussed work. Whatever the case, such modifications will of course require consultation with a specialist. The level of comfort in this property is significantly increased by the presence of a lift and a garage for parking. It is also worth noting that the service charge is modest.

As the crow flies, the building is just 100m away from “Weißer See”, the lake after which both the neighbourhood and the district are named, whilst also being very close to the centre of the capital. Alexanderplatz is less that 6km away and the Hauptbahnhof (Berlin’s main railway station) is just over 9km away. Covering your day-to-day needs, primary and secondary schools, nursery schools, doctors, and restaurants are all within walking distance. Connections to local public transport are similarly nearby. A walk of just 800m through the park will take you to Berliner Allee, with its numerous cafés and high-quality shops. The many opportunities for leisure and recreation in the immediate vicinity, as well as further afield in the green and lake-filled surroundings, add yet more to the extraordinary quality of life which is to be enjoyed in this beautiful spot.